Companies today are managing more diverse workforces. Pay programs must be designed to attract, retain, motivate and engage employees who have very different pay preferences from employees even a decade ago. A recent study lead by Professor Dow Scott, Professor of Human resources at Loyola University Chicago, along with several other faculties at universities throughout the world, examined how employee characteristics are related to pay preferences. 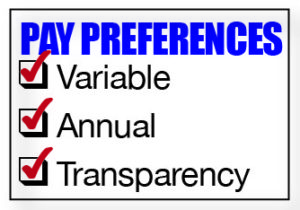 This Compensation Alert eNewsletter summarizes the results of the survey pertaining to U.S. employees. We will review characteristics such as gender, level of age and education, number of employee dependents, compensation differences, and capability and their effect on pay in the U.S.

The article authored by Professor Scott and his colleagues appeared in the most recent Compensation & Benefits Review. The original survey covered 1,077 respondents in seven countries.

One might speculate that workers that are paid more would have the financial capacity to take more risks, and thus prefer variable pay. Participant responses do not confirm that hypothesis, however.  The only significant relationship with pay preferences that was found is a negative one between annual pay and pay transparency indicating that transparency is preferred by those with who make less money.

Not surprising was the fact that education had a positive relationship with annual pay. While more educated survey respondents preferred pay differences based on capability and variable pay, they were not found to prefer pay transparency.

A strong preference for pay variability was found for survey participants who had more dependents.

No significant relationship was found between work experience and any of the pay preferences measured.

Prior researchers have found that men place more emphasis on extrinsic rewards, such as pay and rewards, than women. Women were found to prefer jobs with good coworker relationships, work/life balance and developmental opportunities. Men were found to prefer pay based on performance more than women. Women preferred skill and seniority-based pay systems.

Consistent with prior research, the study found that men prefer variable pay than women do.

Older survey participants with more education and more dependents had a strong preference for variable pay than did those who were younger, are less educated and had fewer dependents. Younger and lower paid participants preferred greater pay transparency. Pay differences that are based on capability were preferred by better-educated employees.

We welcome your feedback on our Compensation Alert eNewsletters. Please contact me at (847) 864-8979 or nlappley@lappley.com to discuss pay differences based upon employee characteristics or other topics of interest.